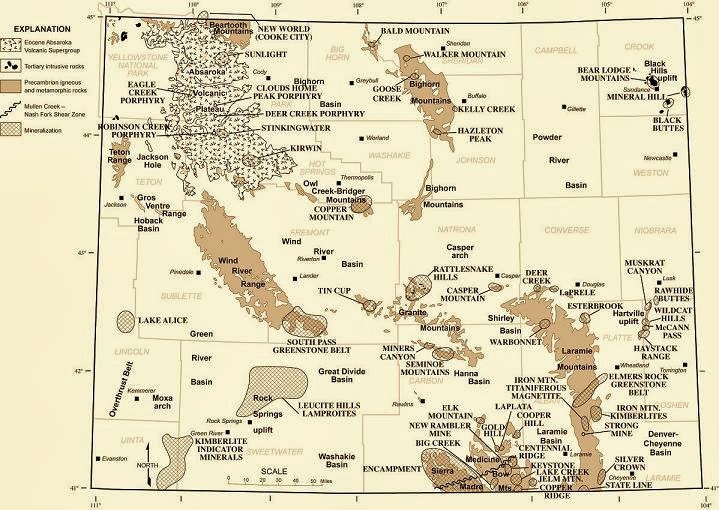 It's hard to believe that it has been more than three decades since I discovered gold in the Rattlesnake Hills in central Wyoming and classified the new gold district as an Archean (more than 2.5 billion years old) greenstone belt. The gold in this district is similar to the rich deposits mined at Cripple Creek, Colorado.

Some questions that need to be asked: (1) Where did the time go? (2) How come the incredibly attractive gold deposits comparable Cripple Creek have not been made into a mine? (3) Why doesn't the State of Wyoming get off its duff and make this a show piece and financial attractive gold play to attract hard rock gold miners to Wyoming? (4) Gold was found in exhalites, veins, stockworks and breccias and also predicted to occur in contact metasomatic deposits related to the intruding Tertiary alkalic volcanics into the greenstone belt rocks and adjacent limy rocks in the sediments - so how come more drilling hasn't occurred in this district? (5) Whatever happened to those giant gemstone deposits found in Wyoming? and (6) How come the former Survey Director isn't in jail?

The first four questions pertain to gold in the Rattlesnake Hills. After I found gold in this district and started a gold rush in 1982, I thought this area would one day have a gold mine. But I also thought the mine would have been developed by 1985 or 1986.

Prior to this discovery, I started a gold rush in 1981 in the Seminoe Mountains. But that area has never really been explored and was tied up for years by a promoter who was interested in making too much money for the property. I also started a mini gold rushes to Purgatory Gulch in the Sierra Madre in 1988, Garrett along the western flank of the Laramie Range in 1989, Mineral Hill in the Black Hills in 1990, Puzzler Hill in the Sierra Madre in 1995 and several rushes to South Pass in the 1980s and 1990s. But then there was the giant of giant deposits that a group of geologists (including me) discovered at Donlin Creek, Alaska.  How is it that none of these have yet been made into mines? Isn't because there isn't enough gold! Nope! Take a look at Donlin Creek - it only has about 43 million ounces of gold worth $tens of billions.
Then again there is the Pebble porphyry deposit. Had nothing to do with the discovery of that one - but it is a big one and estimated to contain gold, silver, copper and other metals that dwarf the Bingham pit in Utah. It is estimated to be about 2.5 times larger!  So how can world-class gigantic mineral deposits like Pebble and Donlin Creek sit for decades and not turn into mines?

Government doesn't work! And when it does, it works against us. When was the last time you found a government employee who was willing to help you? When was the last time you saw a government employee actually working? All government agencies (especially government division heads and directors and Congress for that matter) should be placed under a Sunset law by Congress and every 2 years they should be able to prove they have benefited the public and cut costs. If not -  hit the delete button and get rid of them! It this were to happen, it wouldn't take long and the list of government agencies would quickly diminish, we would have a balanced budget, and the few remaining agencies would learn how to work and work with the people who are paying their salaries.

Sorry, got off on a tangent. Back to geology. Wyoming is an extreme anomaly. The state produced considerably less gold than all of the other western states, yet it sits in the middle of craton. Cratons usually have considerable gold (as well as diamonds, nickel, platinum group metals, etc). So where is all of that gold hiding? Well a good part of it was taken from the public by the Federal government!. Yep, those extraordinary gold-silver-copper deposits in the Absaroka mountains and Yellowstone were taken from the public as were all of the copper-zinc-gold-silver volcanogenic massive sulfide deposits in the Sierra Madre Mountains. But it didn't stop there. The great Carissa gold mine at South Pass was taken from the public by the State of Wyoming as has been much of the South Pass greenstone belt.  Then there was the taking of the gold-silver-palladium-platinum deposits associated with the New Rambler mine, the Lake Owen layered complex and the Mullen Creek layered complex.
﻿
But there are still some good gold deposits that need to be investigated further (until the goverment takes these also). Take for instance the Oregon Buttes- Dickie Springs 28.5 million ounce Tertiary paleoplacer at the base of the South Pass greenstone belt. Where did all of that gold come from? Well, Hecla showed anomalies right under the northern edge paleoplacer that were likely the source of the gold - why isn't anyone looking for this?  Then there is the question of the Seminoe Mountains-Miracle Mile gold-diamond paleoplacer along the northern edge of the Seminoe Mountains. What is there? Where did all of the gold and diamond stability minerals come from?

How about the Copper King gold deposit near Cheyenne? I like this one and have for many years and its the reason why I spent time looking at the hydrothermal alteration characteristics. Over the years, I was able to get companies to look at the property - it is a deeply eroded root zone of a porphyry gold-copper deposit that now has about 2 million gold-equivalent ounces. This property has possibilities all around it. I found evidence of hydrothermal alteration all around this deposit and mapped a fault zone along the eastern edge that offset the ore deposit, with a block down dropped on the east flank - so there is likely more gold in that block. And what is at depth? Some of the porphyry deposits in Arizona have very high grade deposits hidden at depth. Then there are similar anomalies identified by
Klein (1974) and myself.

Then how about the Kurtz-Chatterton gold-copper-silver deposit and the Ferris Haggerty copper-gold-silver deposit? And the list goes on.

"The Rattlesnake Hills, in my opinion, has the highest potential for discovery of large, commercial, gold deposits in Wyoming. It has all of the necessary ingredients to be a significant gold producer - an ancient greenstone belt source terrain for primary gold and intrusion of the belt by hot Tertiary alkalic plugs to mobilize the gold and concentrate the metal in veins, stockworks and breccia.
The gold district was discovered by me in 1981 & was recommended for further research (including drilling large breccias near alkalic intrusives, geophysics over Tertiary sediments, & additional sampling & assays of veins, jasperoids & exhalites) to the University of Wyoming MMRRI & the Wyoming Geological Survey administration: both of whom disagreed & considered the area to be of little interest". - W. Dan Hausel